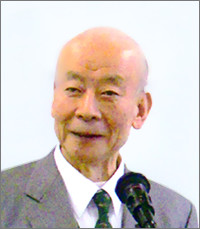 I am delighted that the 7th Asia Pacific Regional Conference of the International Association for Suicide Prevention will be held in Tokyo in 2016. The International Association for Suicide Prevention (IASP) was founded in Vienna, Austria in 1960 by Dr. Erwin Ringel. When I, along with Dr. Hiroshi Inamura (then-professor at Tsukuba University) met Dr. Ringel in Ottawa City, Canada at the 10th General Meeting in 1979, he requested to hold an academic meeting in Japan. However, because the organization of the Japan Association for Suicide Prevention (JASP), was small at that time, we decided not to host that meeting at that time.
Dr. Rokuro Masuda, who was the founder of JASP, as well as it’s Director (and was Professor at Showa Women’s College) retired in 1990’s and Professor Inamura, who took over the position, has died at the age of 60. In 2005, Dr. Yoshinori Cho (Professor at Teikyo University) took up the position and implemented a restructuring of the organization. With his great efforts and contribution, JASP has dramatically increased the number of it’s members.
During the absence of the Director, FIND has played a major role through activities such as holding suicide prevention symposia at various places throughout Japan in conjunction with JASP. Since 2001, FIND was also taking part in Japan’s national suicide prevention policies was responsible for the budget for the symposia held jointly with JASP.

The General Director of 7th Asia Pacific Regional Conference of IASP is Dr. Chiaki Kawanishi (Professor at Sapporo Medical University), who is also a Japanese representative at the IASP and a Standing Director of JASP. There will surely be a strong emphasis on the viewpoint of Asia at this Conference. The vastly diverse cultural and social backgrounds, as well as Asia’s sheer population scale, incorporated in the region are important factors when talking on the topics of “Asia and suicide,” which will interest international academics. The year 2016 is 10th anniversary for the establishment of the The Basic Law Regarding Suicide Countermeasures in Japan and it is anticipated that this Conference will provide a welcome opportunity to further suicide prevention measures in Japan.
We hope for widespread participation and support from diverse sectors. The Conference will be jointly held with the 40th JASP General Meeting, providing our national members with the opportunity to deepen and widen their knowledge and share information and experiences. More information on the 40th JASP General Meeting is available at http://www.jasp.gr.jp.
We hope that many of you will join the conference to share the most current evidence and knowledge in the prevention of suicide around the world.